Entering Round 5 of the 2022 Fulbeck Championship was very much a last minute thing. We only discovered it was possible after completing the ARKS test on the Saturday. As a result, we went in to this round expecting nothing. After all, we only had our practice tyres available, we’d only seen the track the day before and we were aware our engine isn’t a top power one. This event would be very much a learning event. How an MSUK event differs, how mixed grids work, different driver styles etc. For this event, the kart would also sport a tweaked look with the new novice numbers applied.

Being a novice, we started last (15th on the grid). We were prepared for this. Heat 1 was good and despite it being for last place, throughout there was a good scrap between the last 3 in the field. Setting a best time of 55.96, I was marginally faster than the two in front, but it wasn’t enough to be able to make a move stick. Came home 15th.

For Heat 2 it was a 10th place start. Beaten off the line a couple of places were lost. However keeping the kart on the track and facing the correct way, I was able to gain another place until one of the much faster drivers went by a couple of laps later. Setting a best lap time of 55.23 I managed to come home 12th, again having some good scraps, a smidge faster than the person in front but not quick enough to make anything stick. A drop down bumper in front managed to bump me up to 11th post race.

Heat 3 would be my highest starting position of the day, lining up 7th on the grid. Unfortunately dad read the conditions wrong and didn’t drop my tyre pressures for this heat. I got a bad start and dropped to 11th. About half way through the tyres had dropped off and I was sliding more and more dropping a couple more positions to finish 13th. The time wasn’t too bad with a fastest of 55.36.

The first MSUK finals, after the mixed grid heats. For this I lined up 14th. We did drop the tyre pressures for this and the kart was much better handling. Throughout the race, once again we kept it facing the right way and on the track. This helped me pick up a couple of positions in the first couple of laps. This was where I stayed for most of the race, but towards the end, a couple of the faster kids came through (on recovery drives) meaning I crossed the line in 14th within a second of 12th. A fastest lap time of 55.21 would be my PB.

Overall, we came in to the event expecting nothing. We were using tyres that have done countless laps of Rye House. The engine isn’t a top spec engine. Our setup (other than rear sprocket) hadn’t played with, and still learning the track. All that said, during the event we had good battles. We weren’t painfully slow. A lot was learned during the event and in genral the whole experience was fantastic. What we have achieved we can be proud of.

Just a couple of snaps that dad took whilst waiting on the dummy grid. 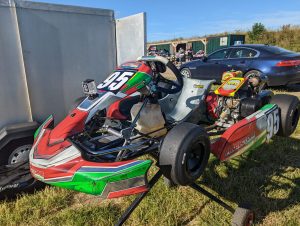 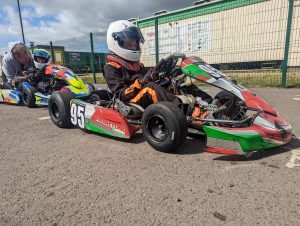 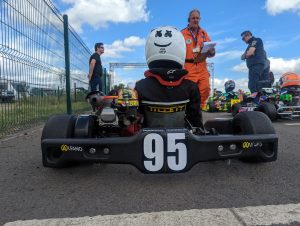 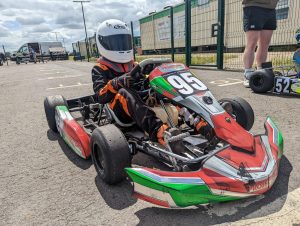