My race report after completing Round 5 of the 2022 Rye House IKR Championship held on the 17th July. How did it go for me?

A strong focus of this race was around heat management. Alpha Timing recorded temperatures of 29°C, which meant taking on plenty of water throughout the day, staying in the shade when not on track and generally trying to keep cool. It was also a tough day to keep the tyres going and finding the right pressures.

Before this round, we sent the engine off for a health check at GX Tuning Store. Dan put the engine on the dyno, ran a few runs and it wasn’t looking too healthy. After the dyno, he started taking it apart and found a few issues that needed work to fix. In the end we had a new block and crank along with the standard rebuild parts (conrod, piston, rings, valves, springs and gaskets). When all was said and done, the engine was completely new, and with some very good dyno runs we were excited for the weekend. We cannot thank Dan at GX Tuning Store enough for turning around the build before the event and making such a good engine.

Going in to qualifying, we were feeling good. As well as the engine being brand new, we tried slightly different gearing. This was in a bid to bring the revs down slightly going in to Stadium. It looks like it was working quite well. Qualifying was close, and although I hadn’t set a PB, I did manage to qualify with a time of 41.178 which was within a second of pole. This was good enough to line up 12th on the grid. As an example of how cometitive it was, 2 tenths faster would have put me 9th, and 3 tenths would have seen 7th.

Heat 1 was a good heat, off the line gaining one place, then a couple of laps later, gaining another. Every lap was in the 41s with the fastest being the last lap at 41.241. Coming home in 10th whilst gaining on the 4 way battle in front was a good result.

Heat 2 would see me line up 10th on the grid. I didn’t get the best of start, losing two places and then another a lap later. An incident on lap 4 where someone ran in to the back of me, saw me brought to a halt at the first hairpin dropping a further 3 places. Despite this, I got my head down, hunted down and recovered 2 places over the coming laps to finish 14th. A best lap time of 41.284 and a large number of laps in the 41s was showing good consistency through the day.

The final sees me lining up 11th on the grid. A decent start saw me gain a position. On lap 5, we dropped a position to one of the quicker drivers who had started out of position due to a DNF. After picking a place up due to a retirement, we then lost a position Throughout the race once again in the 41s bracket, the best lap coming on lap 11 with a time of 41.109 (close to my PB!). At the end I had managed to bring the kart home in 11th overall.

After this event, I am currently lying 10th in the championship, closing the gap to my nearest rival a down to 9 points. The new engine worked very well, seeing me out-drag others rather than getting out-dragged myself, and that’s with altering the gearing for better top speed, sacrificing a little acceleration.

We were too busy managing the heat to take loads of photo’s but I did get one of the new engine at the builders and one sat on the dummy grid showing off the new engine. 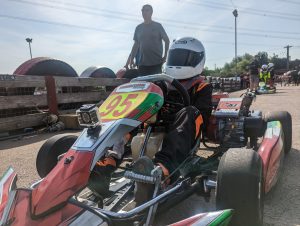